Skip to content
Balmond Hyper 2 years ago 8 min read
It started as a group of college friends who wanted to help during the pandemic....

It started as a group of college friends who wanted to help during the pandemic. They had tech skills, so they used 3D printers to make face shields. Then they organized as a nonprofit, Philly Fighting Covid, and opened a testing site in a Philadelphia neighborhood that didn’t have one yet.


This story is part of a reporting partnership that includes NPR, WHYY and KHN. It can be republished for free.

The organization’s leader, Andrei Doroshin, had bigger ambitions. Even before the first coronavirus vaccine was authorized, the 22-year-old graduate student at Drexel University planned to get involved, although he has no background in health care.

On the evening of Oct. 7, Doroshin gathered 15 of the nonprofit’s staff members and volunteers for a meeting on a Philadelphia rooftop to show them a fancy PowerPoint. More people joined via livestream to watch him unveil his plan to vaccinate the city of Philadelphia.

In slide after slide, he laid out his vision with colorful graphics and maps, covering all aspects of a vaccination system, from scheduling to staffing to safety protocols.

The marketing plan hinged on inoculating local celebrities like rapper Meek Mill, a Philadelphia native, to attract his fan base.

“This is a wholly Elon Musk, shooting-for-the-heavens type of thing,” Doroshin said. “We’re gonna have a preemptive strike on vaccines and basically beat everybody in Philadelphia to it.”

Doroshin described scaling up until they were managing five mass vaccination sites and 20 smaller sites scattered throughout the city. He claimed they could vaccinate between 500,000 and 1.5 million people. And they would make a lot of money doing it.

“This is the juicy slide,” said Doroshin, clicking over to the financing plan. “How are we gonna get paid?” He explained that the vaccine doses were free, provided by the federal government. But Philly Fighting Covid could bill insurance companies $24 a dose for administering it.

“I just told you how many vaccines we want to do — you can do the math in your head,” he said.

A month later, Doroshin made a similar presentation, complete with colorful maps and a $2.7 million projected budget, to the Philadelphia City Council. He said his team at Philly Fighting Covid had begun submitting plans for building out five high-capacity sites that could each take up to 10,000 patients a day.

Philly Fighting Covid’s promise of efficiently vaccinating the population was an alluring one as city leaders were desperate to pull out of the pandemic. Doroshin told NBC’s “Today” show that his company didn’t think like a traditional medical institution. “We’re engineers, we’re scientists, computer scientists, we’re cybersecurity nerds. We think a little differently than people in health care do.”

“We took the entire model and just threw it out the window,” Doroshin added. “We said to hell with all of that. We’re going to completely build on a new model that is based on a factory.” 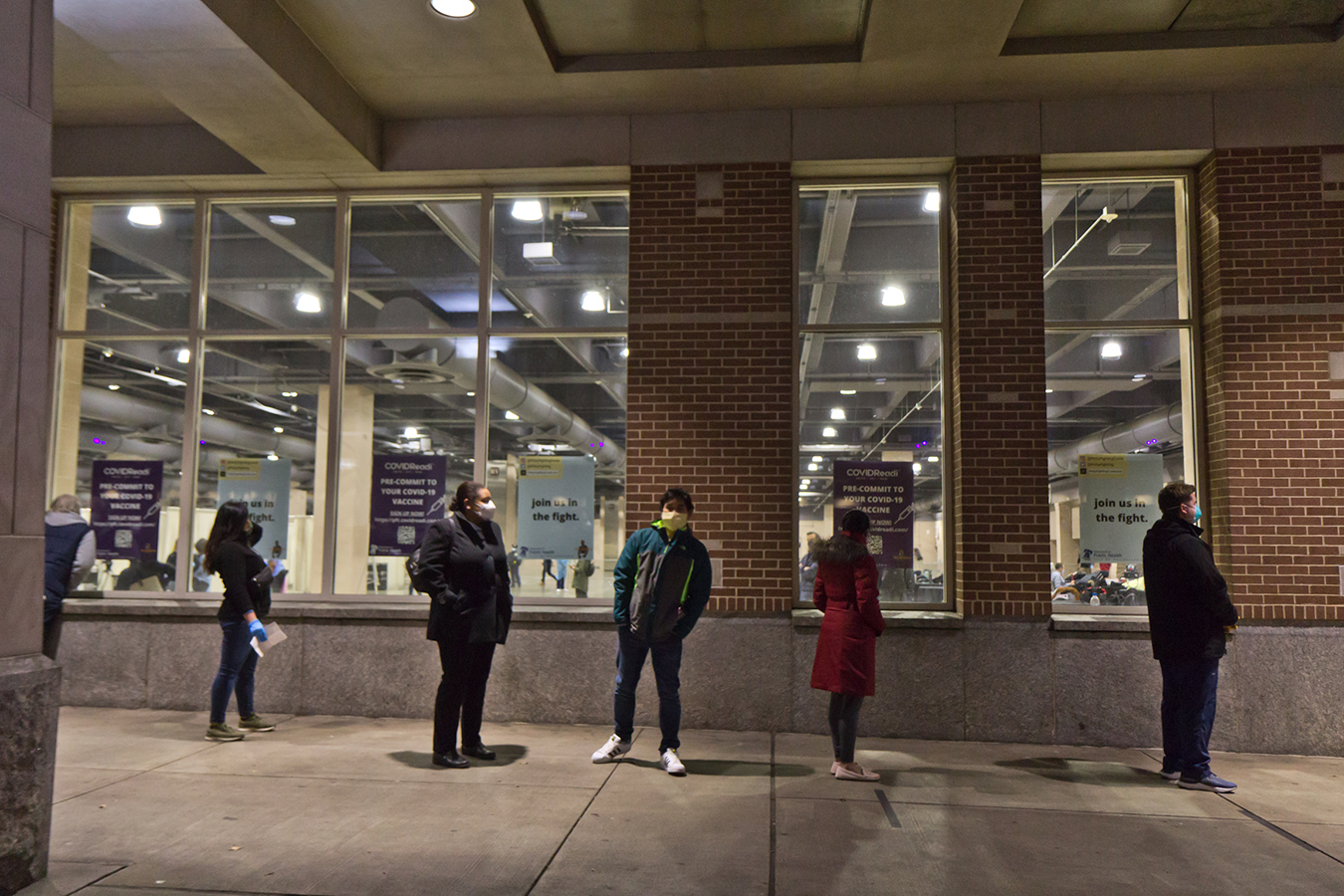 By Jan. 9, Doroshin had a deal with the Philadelphia Department of Public Health and Mayor Jim Kenney’s administration. The city never signed a formal contract with Philly Fighting Covid or gave the organization any money, but it did provide its unofficial sanction and publicity.

Most important, the city turned over part of its vaccine allotment to the group and helped it find recipients by sharing lists of residents who were newly eligible for the vaccine, based on the city’s own prioritization scheme. The city relied on Philly Fighting Covid’s registration as a vaccine provider with the Centers for Disease Control and Prevention.

On Jan. 8, Doroshin and Kenney stood side by side at a press conference to kick off the first mass vaccination clinic at the Pennsylvania Convention Center. It was targeted at health care workers not affiliated with major hospitals, such as home health aides or doctors, nurses or therapists in private practice.

“What you see here is the problem that we’ve been solving for six months,” Doroshin told reporters. “This is the problem of vaccinating an entire population of people on a scale that has never been seen before in the history of our species.”

“Equitable distribution of this vaccine is extremely important to our entire administration,” said Kenney at the Jan. 8 kickoff event.

But in an early sign of trouble, Philly Fighting Covid failed to verify its progress on the equity goal. After that first vaccine event, at which 2,500 doses were administered, City Council President Darrell Clarke requested the demographic breakdown of the recipients.

The health department told him that Philly Fighting Covid had somehow lost all the racial and ethnic data for the patients. The group was blaming “a glitch” in the Amazon cloud. Still, the city continued to turn over thousands of vaccine doses to Philly Fighting Covid.

As the startup continued to hold clinics, WHYY began investigating the organization and its founder.

Reporters uncovered other serious problems, and it soon became clear that the group’s logistical strengths and self-promotional flair, which had once made the startup seem so compelling, weren’t working. The investigation revealed that in December, just before Philly Fighting Covid began its vaccination work, it reorganized and became a for-profit company called Vax Populi.

Philly Fighting Covid had spent months organizing city-funded testing events — at which residents reported good experiences. But in January, it abruptly shuttered those operations, leaving partner organizations in the lurch. The group posted this decision on social media, just a few days after the convention center kickoff, at which Doroshin had promised to open two new testing sites and to start offering free rapid testing.

Several groups that had been partnering with Philly Fighting Covid on testing events claim they received little or no notice, jeopardizing plans for testing in communities of color.

“They completely ghosted us,” said Cean James, pastor of Salt & Light church in Southwest Philadelphia, which had been planning a series of pop-up testing events with Philly Fighting Covid.

Michael Brown had been working with the group to organize a testing event on Martin Luther King Jr. Day. He said Doroshin told his group that testing wasn’t important anymore.

“The statement he made was very clear: ‘I don’t believe that testing is relevant anymore. People don’t follow the instructions, people don’t do what they’re supposed to do, and all it does is … cause panic,’” Brown said later.

There were signs that Doroshin wasn’t that concerned about standard clinical protocols. Employees with more clinical experience than he had said he brushed off technical questions as bothersome and approached the vaccination effort as if he were a tech mogul focused on disrupting norms.

“Stop using best practices,” Doroshin said during a recent interview with HealthDay. “I think the old best practices in health care, in terms of intramuscular injections, were written for a hospital visit that would take 30 minutes, that you needed to do a bill for as a provider visit. Those best practices can mostly go out the window.” 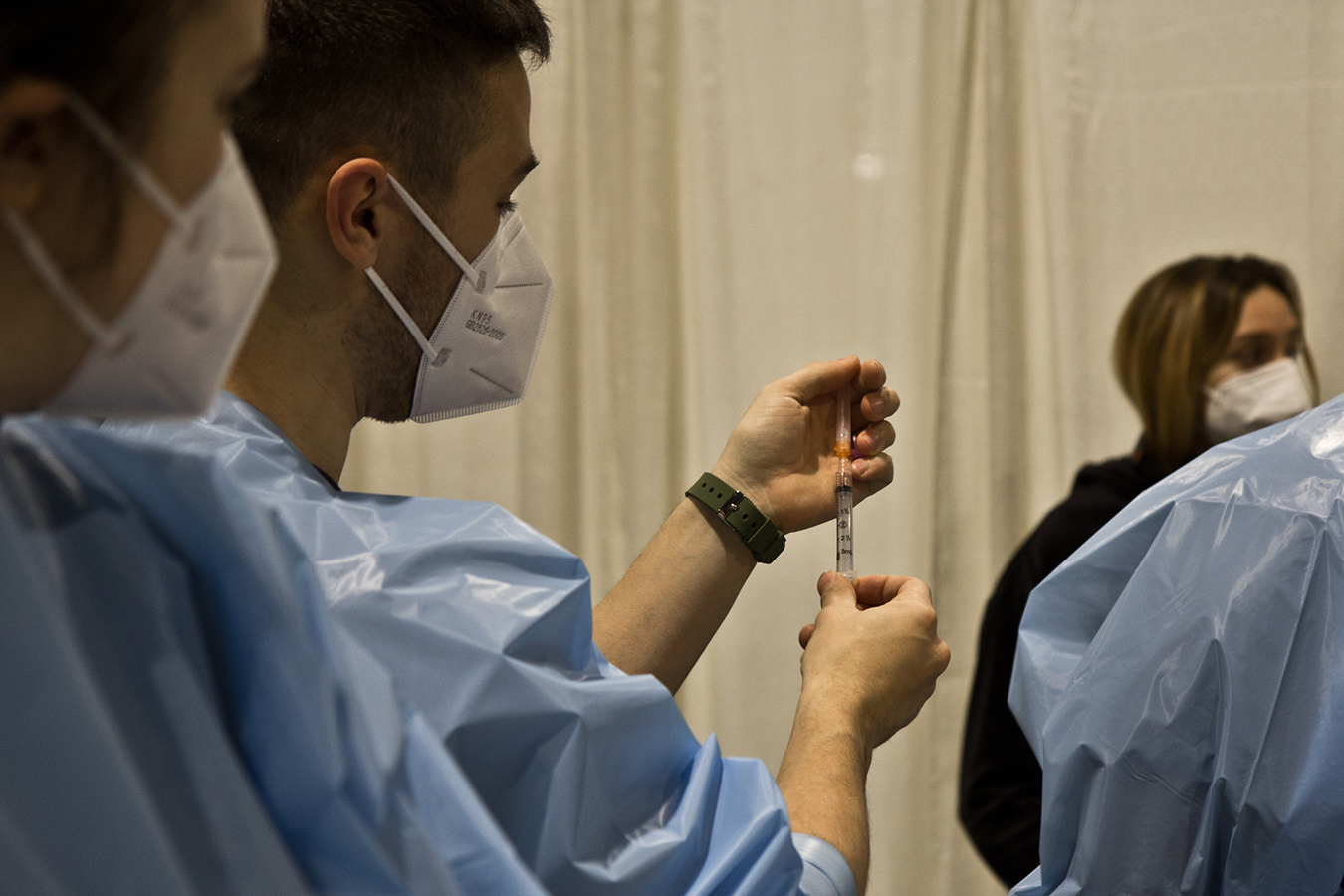 The city soon began to back away from the group. At the initial launch, the city promoted Philly Fighting Covid’s pre-registration website and encouraged everyone to sign up. Just a week later, officials changed course and claimed the city had nothing to do with the website. The conflicting messages caused confusion among the 60,000 Philadelphians who had signed up thinking it was an official city site. Many were left worried about what would happen to their personal information. The city then launched its own pre-registration site.

The process Philly Fighting Covid used to schedule appointments was also flawed. Anyone who received a hyperlink could sign up for a time slot, which prompted many who received it to assume they were automatically eligible, even though at that time the clinic was technically only for health care workers and the elderly.

Some who received the link in error went through with their appointments. Others backed out when they learned it wasn’t their turn. Still more had their doses canceled by Philly Fighting Covid upon arrival.

When Jillian Horn came to get a shot, she said she saw seniors waiting in line get turned away because of booking errors.

“There was literally 85-year-olds, 95-year-old people standing there, with printed appointment confirmations saying, ‘I don’t understand why I can’t get vaccinated,’ ” Horn recalled.

On Jan. 23, volunteer nurse Katrina Lipinsky was helping at one of Philly Fighting Covid’s vaccination events. She said that about half an hour before the event’s scheduled end, staffers started telling volunteers and other workers to call anyone they knew to come in for a shot because there were going to be extras.

Then she saw Doroshin grab a handful of vaccines and stuff them in his bag, along with the corresponding CDC vaccination record cards.

“The idea of somebody who’s not a licensed health care professional vaccinating their own friend, with or without observation, period, that certainly was not the right thing to do,” Lipinsky told WHYY.

Doroshin initially denied Lipinsky’s account but eventually admitted he took doses home during a Jan. 28 interview on NBC’s “Today” show. The following day at a press conference, he said he had vaccinated his girlfriend, but no one else. He did not explain how Philly Fighting Covid ended up with extra doses after it turned away people, including seniors, who were in line waiting for the vaccine that same day.

The city cut ties with Philly Fighting Covid on Jan. 25, citing the company’s abandonment of its testing work and the company’s new privacy policy, which would have allowed it to sell patient data.

Health commissioner Dr. Tom Farley has been asked to explain what happened. Doroshin approached with a vaccine plan, he said, that met the city’s health standards.

“I hope people can understand why on the surface this looked like a good thing,” Farley said. “In retrospect, we should have been more careful with this organization.”

The city had other options for a mass vaccination partner. Philadelphia is home to four major health systems, including the University of Pennsylvania medical system, which said it was prepared to ramp up community vaccination efforts as far back as November, well before the city started working with Philly Fighting Covid.

In a press conference at his apartment building Friday, Doroshin called the city’s decision to dissolve the partnership “dirty power politics” and alleged it was part of a political conspiracy. He said that if given the chance, he wouldn’t have done anything differently.

This story is part of a partnership that includes WHYY, NPR and KHN.