Stay home and save lives, governors have been telling residents since California’s Gavin Newsom led the way on March 19. But sheltering in place is a luxury that many Americans cannot afford, Claire Cain Miller, Sarah Kliff, and Margot Sanger-Katz wrote in the New York Times. “Service industry workers, like those in restaurants, retail, childcare, and the gig economy are much less likely to have paid sick days, the ability to work remotely, or employer-provided health insurance.”

This means many workers must choose between staying home when ill or going to work sick so they can keep getting paid. Only 60% of service industry workers can take paid time off when they are sick — even though they are more likely than white-collar workers to come in contact with other people’s bodies or food, the Times reported. Not to mention that service jobs put workers at increased risk of exposure to the coronavirus in the workplace or commuting, often on public transportation.

In California, which produces over one-third of the country’s vegetables and two-thirds of the country’s fruits and nuts, agricultural workers are on the front lines of the pandemic. Charged with keeping the US food supply moving, farmers and farmworkers have been deemed essential by the state (PDF) and federal governments. Yet they remain vulnerable to the coronavirus because they lack adequate protective equipment, work in close proximity to others, and often live in overcrowded housing.

“Nothing has changed at work,” Amadeo Sumano, a strawberry picker in Ventura County, told Susie Cagle in the Guardian. “The distance principle, six feet between people, does not work in agriculture.”

Ninety-six percent of California’s agricultural workers are Latino, according to UnidosUS (PDF), including some temporary workers on H-2A visas and undocumented immigrants. Many have reported that working conditions haven’t changed since the pandemic began. They still work shoulder-to-shoulder while operating machinery, lack adequate wash stations and protective equipment like gloves and masks, and remain silent about their concerns for fear of deportation or losing their jobs.

Though some employers have given undocumented farmworkers letters declaring that the US Department of Homeland Security considers their jobs critical to the food supply chain, the letters “are not a free pass from immigration authorities, who could still deport [them] at any time,” Miriam Jordan reported in the New York Times.

The convergence of low-paying agriculture jobs and the state’s affordable housing crisis means that many agricultural workers live in unsanitary, crowded housing where it would be difficult to isolate household members if one fell ill. At a motel in Salinas that routinely houses H-2A workers, people sleep three or four to a room, Kate Cimini reported in CalMatters.

Some workers face an extra barrier: a lack of information about COVID-19 in indigenous languages spoken in Mexico, including Triqui, Zapoteco, and Mizteco. Some California county agricultural commissioners have made information in indigenous languages (PDF) available on their websites. While employers are responsible for educating their workers, Cimini reported, many don’t have interpreters on staff.

But the CARES Act leaves out undocumented workers, who pay an estimated $3 billion annually in California state and local taxes, according to the California Budget & Policy Center. Undocumented workers are ineligible for unemployment insurance or safety-net programs like Medicaid and the Supplemental Nutrition Assistance Program. One of the few benefits they can get took effect in January 2020, when undocumented young adults up to age 26 became eligible for Medi-Cal.

Families of mixed immigration status that include US citizens are ineligible for most public supports during the COVID-19 crisis. “The failure to include undocumented workers and mixed-status families in the COVID-19 emergency response follows a history of inequitable federal and state policies that have excluded these workers and families from public supports to meet their most basic needs, despite their significant contributions to essential work, key industries, the state economy, and local communities,” said the California Budget & Policy Center in a fact sheet.

Because of the federal public charge rule, some immigrants are avoiding important public benefits, including health care, for which they are legally eligible. Immigration groups like the California Immigration Policy Center are having difficulty reassuring immigrants that they can continue seeing doctors and enrolling in health programs, Sarah Dar, the center’s director of health and public benefits policy, told Claudia Boyd-Barrett in the California Health Report.

To support California’s undocumented workforce, Governor Gavin Newsom announced on April 15 the creation of a “$125 million relief effort . . . to provide cash assistance to families in need that lack legal status,” Lissandra Villa reported in Time magazine. The state contributed $75 million to the relief effort, and a network of philanthropies has committed to contributing the other $50 million. The network, Grantmakers Concerned with Immigrants and Refugees (GCIR), has launched the California Immigrant Resilience Fund with more than $6 million in contributions from foundations (including CHCF) and is accepting online donations from the general public.

“California is the most diverse state in the nation,” Newsom said in a press release. “Our diversity makes us stronger and more resilient. Every Californian, including our undocumented neighbors and friends, should know that California is here to support them during this crisis.”

The state-financed immigrant relief fund, the first in the nation, will distribute one-time cash benefits to an estimated 150,000 undocumented adults in the state. Each can apply to receive $500, for up to $1,000 per household. This distribution will be overseen by a community-based model of regional nonprofits that serve undocumented communities.

“During this moment of national crisis, undocumented immigrants are risking their own health on behalf of the rest of us, saving lives as health care workers, caring for our loved ones, and growing much of the food we depend on,” said Laurene Powell Jobs, founder and president of the Emerson Collective, which leads the GCIR fund with Blue Shield of California Foundation. “With the federal government and many states failing to provide undocumented immigrants the economic and health supports all Americans deserve, I hope that corporations, foundations, and individuals across the country will join us in providing the emergency relief these members of our community need to weather this challenging time.”

Other supports are underway. The city of Oakland, working with a coalition of nonprofits, established the Oakland Undocumented Relief Fund “to provide direct financial support, in the form of checks or prepaid debit cards, to some undocumented community members affected by the COVID-19 pandemic,” Azucena Rasilla reported in Berkeleyside. The San Joaquin Valley Health Fund, a funder collaborative working across nine counties, created a rapid response fund (PDF) to support farmworkers, immigrants, and others in need of immediate support. Los Angeles mayor Eric Garcetti launched the Angeleno Campaign to provide direct cash assistance to Angelenos most in need, regardless of immigration status.

To increase access to care for any Californian who might have COVID-19, the state “recently allowed for ‘presumptive eligibility’ in its Medi-Cal program, allowing anyone who is uninsured, including undocumented people, to be tested and treated,” Ana Ibarra reported for CalMatters.

And on April 2, Governor Newsom announced that the state was allocating $50 million to the California Infrastructure and Economic Development Bank for loan guarantees for small businesses that may not be eligible for federal relief — including those owned by undocumented immigrants or by people with limited capital.

What else would you like to know about COVID-19 and its impact on the health care system or underresourced groups? Tweet at me with #EssentialCoverage or email me.

The post Staying Home: Not an Option Available to All appeared first on California Health Care Foundation. 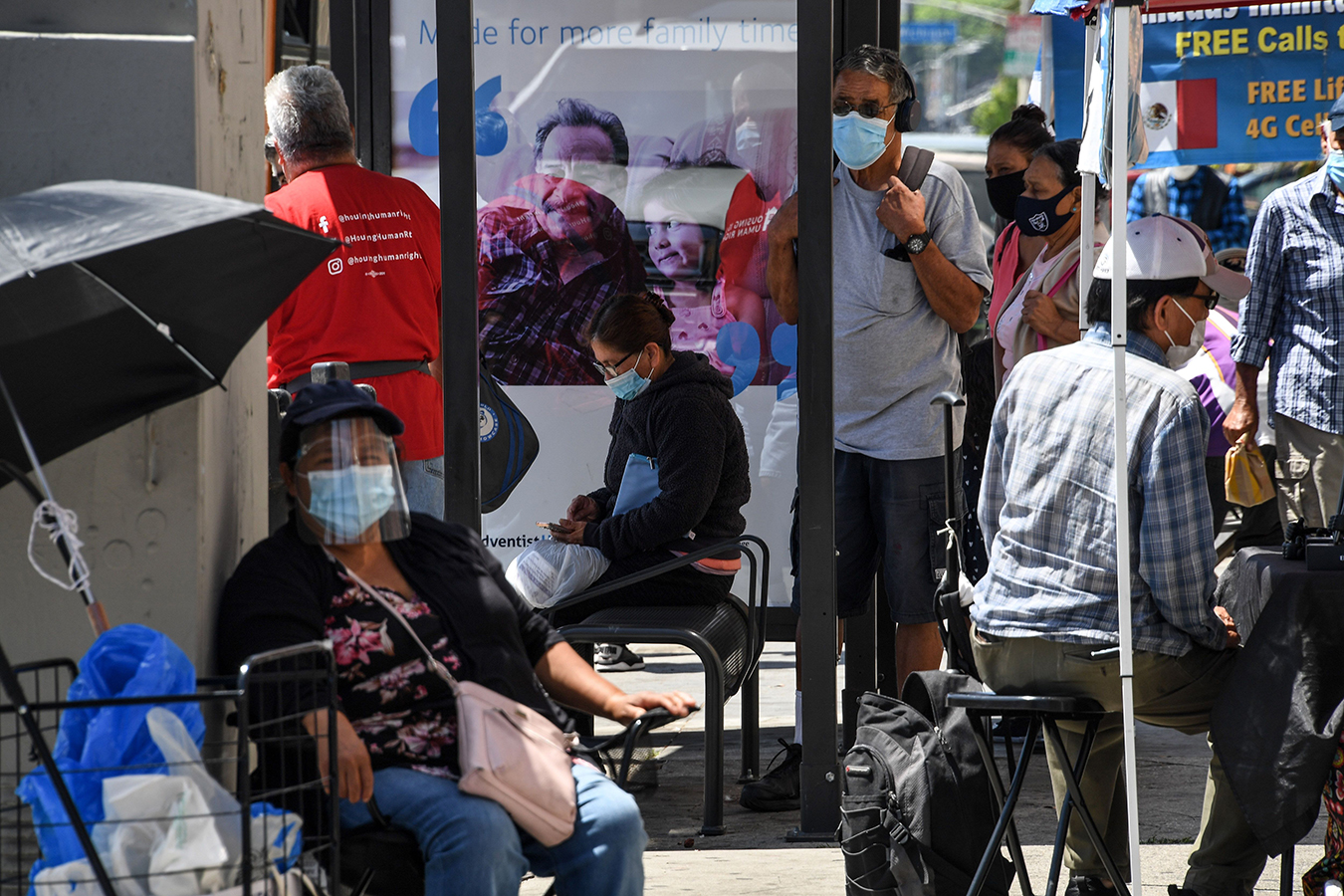